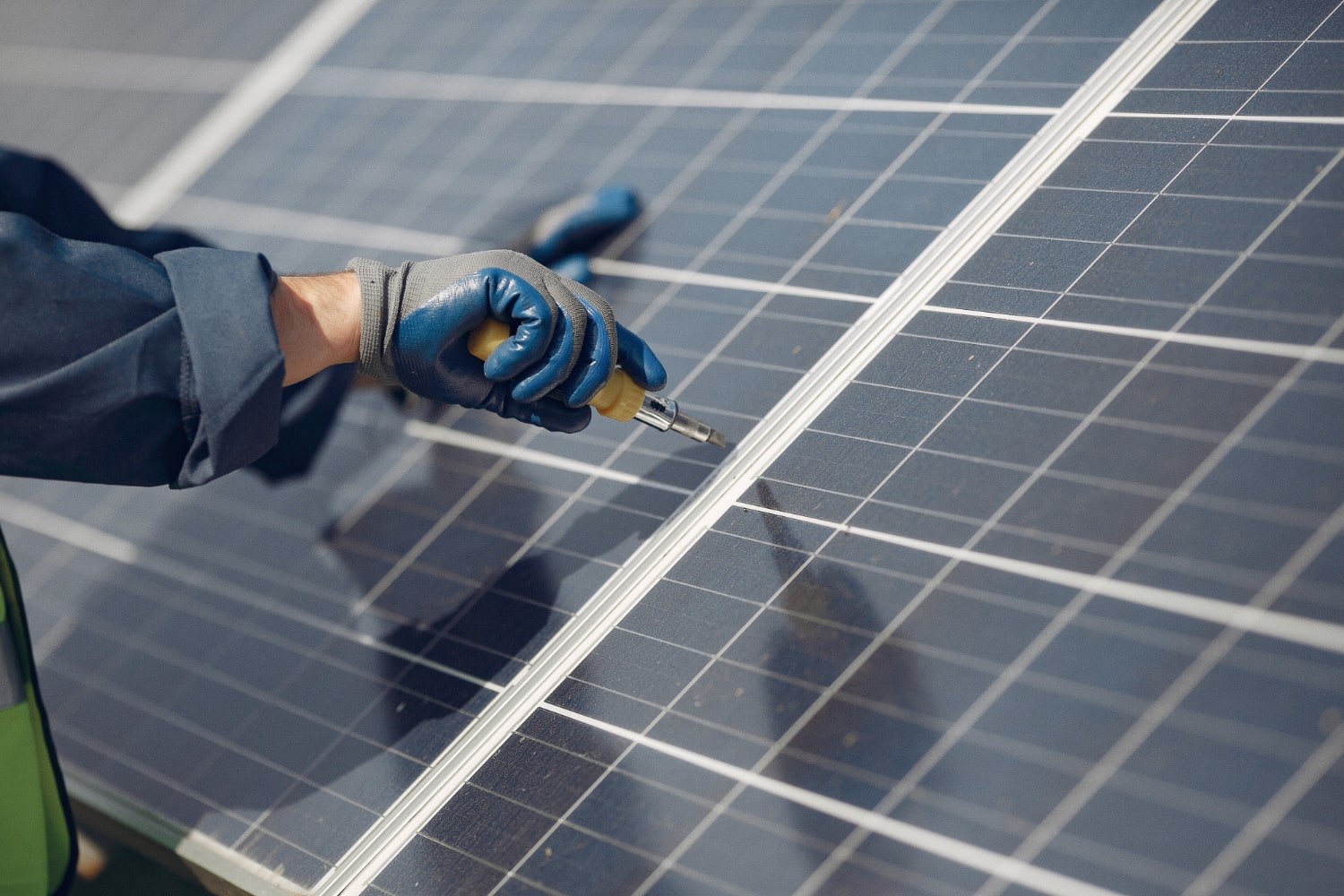 Posted on
July 1, 2022
in
Sustainable Solutions

In a world reeling under the impact of climate change, anything sustainable has huge potential. Enter solar! One of the fastest-growing renewable energy sources, solar is attracting a lot of eyeballs lately. This blog is an attempt to give a brief overview of solar – from how solar panels work, their uses, to their impact on the global market.

Solar panels consist of electronic components called photovoltaic cells, which absorb and convert sunlight into electricity in what is known as the photovoltaic effect. A typical solar cell has a layer of N-type silicon placed next to a layer of P-type silicon. While an N-type silicon has an extra mobile electron in its outer energy field, P-type has a vacant hole, carrying a positive ion. Where the two layers meet, a region called depletion layer is formed due to electrons migrating from the N-side to fill the holes in the P-side, forming an electric field between the charges. This movement of electrons to the P-side leaves a slightly positive charge on the N-side and a slightly negative charge on the P-side. When photons from the sun hit a solar cell, they excite the electrons into a state called ‘electron-hole pair’. Near the depletion layer, however, these pairs get separated by the electric field, moving the electrons to the n-side and the holes (positive ions) to the P-side. By placing an external connection on both sides, an electric flow can be generated, which then can be used to power up facilities.

There has been a lot of talk about solar-powered vehicles lately. They are, by definition, electric vehicles that make use of self-contained solar cells to power themselves. Solar vehicles come with a rechargeable battery, wherein the current generated by the solar cells is stored. The battery also stores kinetic energy that vehicles generate every time the brakes are applied. What makes solar vehicles such an interesting prospect is their energy efficiency! They consume less energy, which enable them to make the maximum use of the energy they generate! Although solar-powered vehicles are yet to go mainstream, the fact that sustainable alternatives are gradually picking up means it wouldn’t be too long before we see them on the roads.

Mining Bitcoin has grown in popularity in recent years, with electricity being used to power mining rigs. This, however, is an energy-intensive affair as mining operations generally consume larger amounts of electricity. Thankfully, solar has come to the rescue. These days, we have rigs, powered exclusively by solar energy. With solar as the power source, mining is relatively economical, and more importantly, clean!

Greenhouses or Green Buildings are eco-conscious and resource-efficient structures designed to offer a better quality of life. One of the striking features of green buildings is the extensive use of plants in the building. This along with the use of materials with high thermal mass and the construction of areas that have a lot of room for airflow help keep the entire structure cool.

Solar farms are large-scale electricity generating parks with multiple panels interconnected over vast, open areas. They are intended to provide commercial electricity to a utility rather than a local customer or user (utility-scale solar). Solar farms can be installed either onshore or on water utilising a floating base. Although these farms need massive investment, they can be a great alternative to thermal and nuclear power plants.

• The North American renewable energy market is predicted to increase at a CAGR of more than 7.2 per cent between 2020 and 2025, according to Mordor Intelligence. North America is one of the top countries in terms of solar energy infrastructure development and advancement. In recent years, the renewable energy business in North America has seen increased expansion.

Gone are the days when electricity could only be generated at the expense of the environment. With solar panels bursting onto the scene, there exists a strong possibility of our world finally moving away from fossil fuels to one powered exclusively by clean energy. Of course, there is still a long way to go, but the early signs are promising!